The US: signs of heightening trade credit risk?

Despite solid fundamentals, underpinned by persistently strong household and business confidence, clouds are developing over the U.S. economy.

Fiscal and trade policy risks have increased, posing a double threat to the strong domestic economy. There is still confidence that the next recession won’t start in 2019, however the risk of a downturn occurring sooner than expected has increased.

U.S. respondents are far more likely to sell on credit to B2B customers than last year 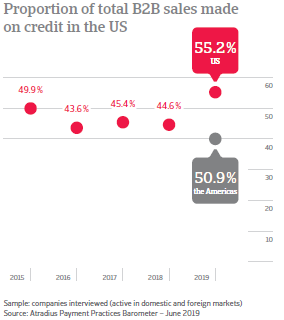 Survey respondents in the U.S. have historically shown a preference for selling to their B2B customers on cash rather than on credit terms. However, current survey findings point to a shift in preference to selling on credit this year. 55.2% of the total value of U.S. respondents’ B2B sales was reported to be made on credit (up from 44.6% last year). It is highly likely that the larger proportion of credit sales this year reflects the improved export trade relations following the USMCA agreement in 2018. U.S. respondents’ exports to Canada increased to 35% from 28% last year, while their exports to Mexico increased to 30% from 22%. When asked to explain the reasons for their increased export activity to Canada, most U.S. respondents (70%) said that the increase in USMCA exports was stimulated by economic reasons, and 30% by government trade policies. In regards to increasing exports to Mexico, 9 in 10 U.S. respondents said this was due to both economic reasons and reasons connected with government trade policies.

Payment terms granted by U.S. respondents are the swiftest in the USMCA region

Despite being far more likely to sell on credit to B2B customers than one year ago, respondents in the U.S. do not appear similarly inclined to set more relaxed payment terms. Most U.S. survey respondents (89%) requested quicker payment of invoices from B2B customers than one year ago, with terms averaging 24 days (down from 27 days last year). These are the shortest in the USMCA region, and compare to an average of 37 days in Canada (up from 25 days last year) and 27 days in Mexico (down from 33 days one year ago). In Brazil, the average is 38 days (up from 32 days last year).

Consistent with the increased use of trade credit in B2B transactions, there is a heightened perception of credit risk amongst U.S. respondents. This may explain why their credit management policies rotate around the assessment of a prospective buyer’s creditworthiness prior to any trade credit decision. Survey findings point to U.S. respondents (35%) performing creditworthiness checks more often than their peers in Canada (30%), and less often than their peers in Mexico (38%) and Brazil (43%). Reserving against bad debts, which is meant to ensure financial stability should the assessment of creditworthiness prove inaccurate, is done by 28% of respondents in the U.S. vs. 33% in both Canada and Brazil, and by 18% in Mexico.

One fourth of the total value of U.S. respondents’ B2B invoices remain unpaid by due date

U.S. respondents will expand use of credit management practices to mitigate trade credit risk over the coming months

Most U.S. respondents (55%) do not expect payment practices of B2B customers to change much over the coming months. 12% anticipate an improvement, while 33% expect an increase in late payments and in the number of U.S. firms filing for bankruptcy this year. For 29% of respondents, long overdue invoices (more than 90 days overdue) are expected to increase over the coming months, negatively affecting DSO. Moreover, 20% of U.S. respondents expressed concern that external borrowing conditions might become more difficult. This would negatively affect working capital and long-term investments in the business for 33% of respondents. To ensure their company’s financial flexibility and protect their business against the risk of payment default by their B2B customers, 51% of U.S. respondents will more often request cash payments from B2B customers. In the USMCA region, 63% of respondents in Mexico and 39% in Canada will request cash terms. Nearly half of U.S. respondents reported they will more often perform dunning activities, outsource collection of past due invoices or offer discounts for early settlement of invoices.

Overview of payment practices in the USA

Trade credit risk is highest in the U.S. metals sector, and lowest in the transport sector

The value of overdue invoices is highest in the metals sector at 40.4% of the total value of B2B invoices. The ICT/electronics sector at 33% and the construction sector at 32% follow. The transport sector recorded a low of 11%.

The ICT/electronics sector in the U.S. reported that 1.9% of their B2B receivables were written off as uncollectable, the highest proportion in the country. The machines sector follows at 1.7%. At the lower end of the scale, the chemicals sector reported an average of 1.1% of B2B receivables written off as uncollectable and the agri-food sector less than 1%. 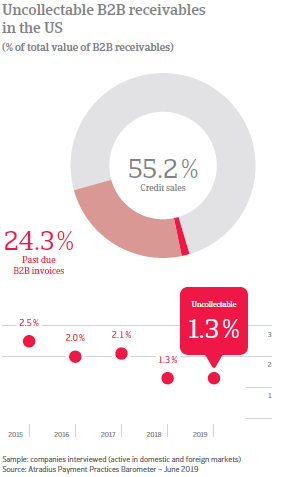 Respondents from large enterprises in the U.S. extended the longest and those from micro enterprises the shortest average payment terms to B2B customers (averaging 30 days and 21 days from the invoice date, respectively).

Large enterprises took the longest to cash in overdue invoices

SMEs in the U.S. recorded the highest rate of uncollectable receivables

Despite collecting payment of invoices faster, SMEs have a significantly worse track record when it comes to collecting payment. SMEs in the U.S. recorded the highest proportion (2.0%) of B2B receivables written off as uncollectable. The average for large enterprises is 1.3% and for micro-enterprises less than 1%.

The US: signs of heightening trade credit risk?

Despite solid fundamentals, underpinned by persistently strong household and business confidence, clouds are developing over the U.S. economy.