The Canadian economy continues to operate near its potential and the composition of growth is more balanced.

GDP is forecast to grow below 2% this year as export, household consumption and investment growth further ease. However, the Canadian economy should still experience positive momentum, with low unemployment, manageable inflation and rising, but historically low interest rates. Insolvencies are expected to level off this year. 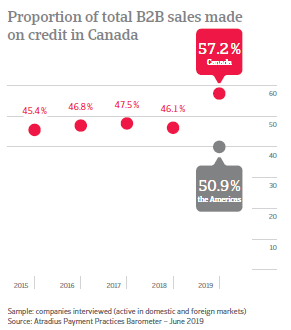 Consistent with what observed in the US, Canadian respondents have traditionally shown a greater preference for selling to their B2B customers on cash than on credit. However, current survey findings reveal a shift in preference to selling on credit this year. 57.2% of the total value of Canadian respondents’ B2B sales was reported to be made on credit (up from 46.1% one year ago). This is the highest figure observed in the Americas (55.2% in the U.S., 45.4% in Mexico and 46.4% in Brazil) suggesting that respondents in Canada are offering trade credit more frequently to stimulate sales and particularly exports to the US, which have slowed this year. As survey findings reveal, the exports of respondents to the US decreased to 30% from 32% last year, exports to Mexico increased to 31% from 27%. When asked to explain the reasons for their decreased export activity to the US, most Canadian respondents (81%) said that this was due to reasons connected to both the economic environment and the government trade policies. The same opinion was expressed by 62% of respondents in regards to the more dynamic export trade relations with Mexico.

Beside being much more inclined to trade on credit with B2B customers than last year, Canadian respondents seem equally inclined to set much longer terms for settlement of invoices. On average, payment of invoices from B2B customers was requested within 37 days from the invoice date, which compares to the average of 25 days last year. These are the longest in the Americas, ( 24 days in the US down from 27 days last year and 27 days in Mexico down from 33 days one year ago) and one day less than in Brazil (average 38 days (up from 32 days last year).

Consistent with the increased sales on credit observed in Canada, underpinned by more relaxed payment terms than in the past, Canadian respondents show themselves to be very focussed on reserving against bad debts. This is meant to ensure the financial stability of the business should the assessment of their buyers’ creditworthiness prove inaccurate. Survey findings reveal that Canadian respondents (33%) use this credit management practice almost as frequently as their peers in Brazil (34%), but more frequently than their peers in the US (28%) and Mexico (18%). 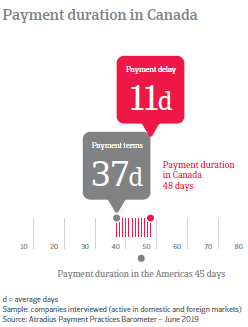 25% of the total value of the B2B invoices issued by respondents in Canada was reported to be still outstanding at the due date. This compares to 24% in the US, 27% in Mexico and 33% in Brazil. Compared to last year, the average time it took Canadian respondents to receive payment for outstanding invoices increased to 54 days from 49 days. This likely reflects the more relaxed payment terms mentioned earlier. Of note, in all the other countries surveyed in the Americas, average payment duration decreased over the past year. To manage cash shortfalls due to the lengthening of the cash conversion cycle, nearly 30% of respondents in Canada were forced to delay payment of invoices to their own suppliers. On average, respondents in Canada wrote 1.4% of the total value of their B2B receivables off as uncollectable (this compares to 1.5% last year).

Overview of payment practices in Canada

Trade credit risk is highest in the ICT/electronics sector, and lowest in the services sector

The value of overdue invoices is highest in the ICT/electronics sector at 34.4% of the total value of B2B invoices. The construction sector at 33% follows. At 22%, it is lowest in the services sector%.

The construction sector in Canada reported that 1.7% of their B2B receivables were written off as uncollectable, the highest proportion in the country. The consumer durables sector follows at 1.6%. At the lower end of the scale, is the services sector with 1.1%. 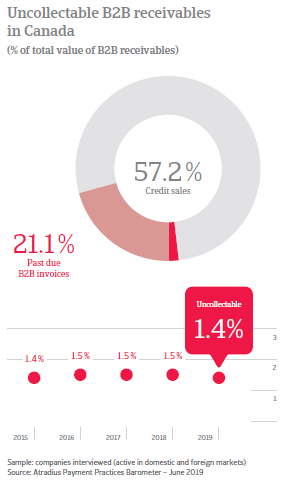 Respondents from large enterprises in Canada extended the longest and those from SMEs and micro enterprises the shortest average payment terms to B2B customers (averaging 37 days and 30 days from the invoice date respectively).

Large enterprises took the longest to be paid for overdue invoices

Large enterprises have the highest rate of uncollectable receivables

Being the slowest to collect past due invoices, large enterprises in Canada recorded the highest proportion (3.0%) of B2B receivables written off as uncollectable. The average for SMEs is 1.9% and for micro-enterprises less than 1%.

Despite a forecast growth slowdown in 2019 the economy should still experience positive momentum, with low unemployment and manageable inflation.