A severe economic downturn and elevated risk of fiscal sustainability, but still resistant to major shocks. 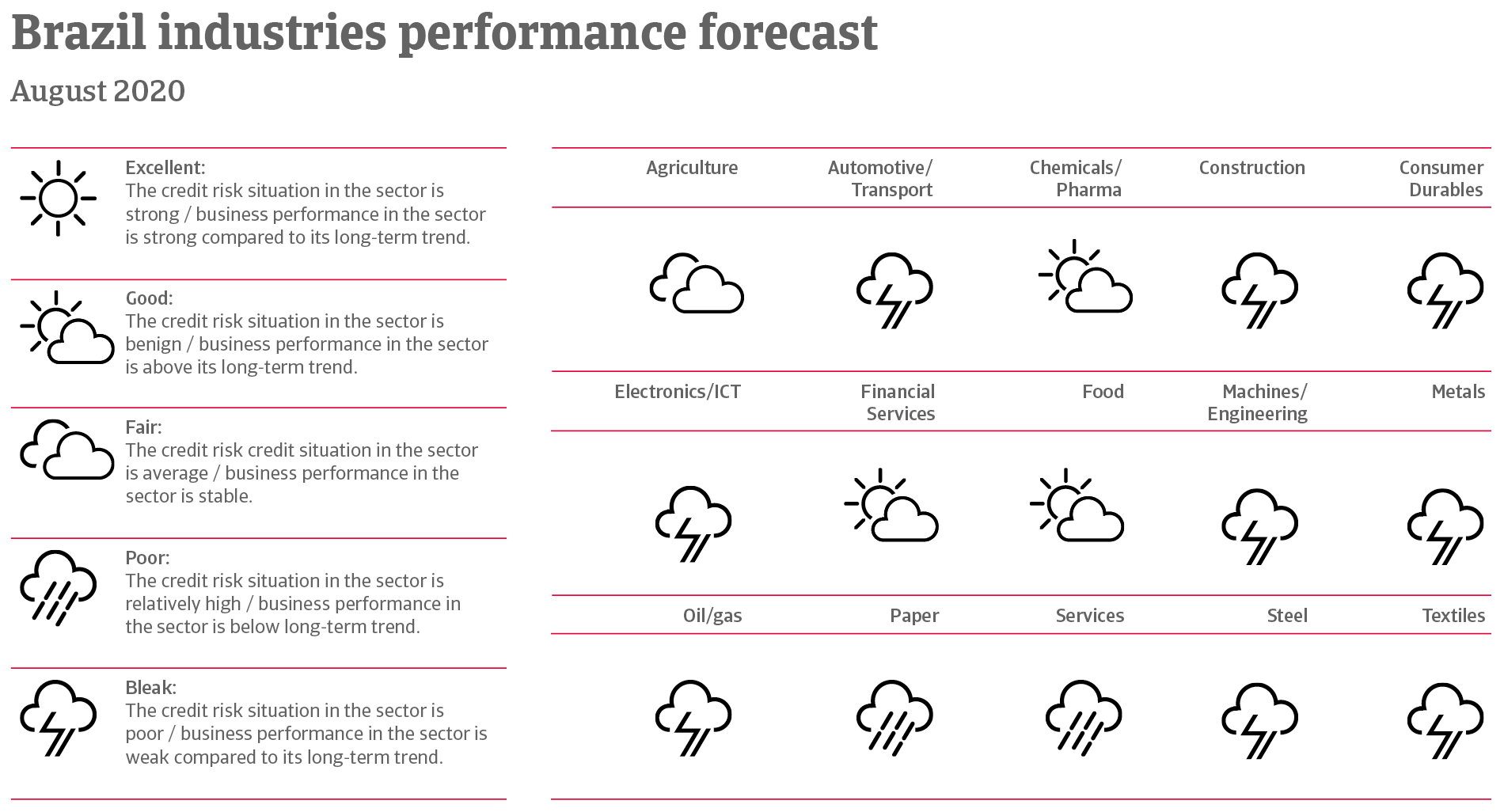 A severe contraction of domestic demand and exports in 2020

The impact of the coronavirus pandemic has put an end to the modest economic rebound since 2017. The rebound followed Brazil’s longest and deepest recession in 2014-2016, when GDP shrank by almost 9%. In 2020, GDP is expected to contract by about 5%. The economy´s vulnerability stems from its relatively high dependence on the service sector and commodity exports, and on its high public debt.

The spread of the coronavirus in Brazil and subsequent lockdown measures have a severe impact on domestic demand, with investment and private consumption expected to contract 5% and about 8% respectively in 2020. Exports suffer from sharply decreasing demand (especially from China, the US and Argentina), and are forecast to shrink by more than 6% this year. The only positive exception are soybean exports, which hit a record high in April 2020.

The ongoing recession has a major impact on the business performance and credit risk situation of almost all key industries, and has led to many downgrades (see chart above). Automotive, consumer durables, electronics, services, and textile production and sales are deteriorating due to widespread lockdowns and rising unemployment, which is forecast to increase to more than 13% this year. Within the services industry mainly hotels and catering, restaurants, bars, entertainment and tourism-related businesses are severely suffering. Exports of several commodities are decreasing due to the global economic downturn, including much lower demand from China. The oil and gas industry, which was already in a difficult position before the pandemic, is suffering from very low prices and subdued demand.

Deteriorated demand from the oil and gas and the construction sectors have a knock-on effect on demand for machines, metals, and steel, industries in which production is also impacted by the lockdowns. Across all industries, businesses that rely heavily on imports are negatively affected by the recent depreciation of the real of more than 25% against the USD.

The default risk across all major sectors has sharply increased, and business insolvencies are expected to increase sharply by about 20% in 2020.

In order to support the economy, the Central Bank lowered interest rates several times in early 2020, to a historical low of 3.0% in May. Inflation is expected to remain below 4%, as the recession and low energy prices offset higher import costs resulting from a weaker currency. This provides the Central Bank with some room for additional monetary easing if needed.

The federal authorities announced a package of fiscal measures adding up to 6.8% of GDP, and additional measures are expected. Congress declared a “state of calamity” in March, which in 2020 allows the government to waive its obligation to comply to strict laws regulating public spending. Due to the additional fiscal measures and the economic contraction, the fiscal deficit is expected to increase to more than 10% of GDP in 2020, with public debt rising to almost 90% of GDP.

The sizeable fiscal deficit was already Brazil´s major economic weakness before the coronavirus outbreak, with persistently high annual budget deficits over the past couple of years. A constitutional amendment to eliminate automatic budget spending growth in line with rising inflation passed in 2016, and the adoption of a comprehensive pension reform in 2019 were necessary steps towards more fiscal sustainability. However, additional structural reforms (e.g. tax reforms) are needed to lower government debt in the medium-term. This is necessary to put government debt on a sustainable path, and to sustain investor confidence in the long-term.

Currently it seems that reform efforts are off the agenda due to the focus on containing the coronavirus spread and the weaker position of the government. That said, refinancing and sovereign default risk are for the time being mitigated by the fact that most of the debt is financed domestically (87%), in local currency (95%), and the government is a net-external creditor.

Vulnerable to changing investor sentiment, but resistant to major shocks

Due to a relatively high level of portfolio investment inflows (more than 140% of international reserves) Brazil is vulnerable to shifts in investor sentiment. The increased risk aversion of global financial markets that triggered large capital outflows from emerging markets due to the coronavirus pandemic has also led to increased pressure on the real, which at early May had depreciated 28% against the USD.

However, a strong financial sector, sizeable official reserves, relatively low external refinancing needs, and the use of currency risk hedges enable the flexible exchange rate to act as a shock absorber. Under the condition that international risk aversion eases once the coronavirus pandemic abates, it is expected that the real will regain its losses.

Brazil´s external financial situation is expected to remain robust, keeping transfer and convertibility risks low. Despite decreased official reserves due to market interventions since March in order to support the exchange rate, liquidity is more than sufficient to cover imports (more than 15 months) and external refinancing needs. The current account deficit remains low, and fully financed by foreign direct investment.

Brazil´s banking sector is well regulated and sufficiently capitalised. The system is only modestly dollarized, and dependency on external wholesale financing is low, shielding the banking system from adverse shocks.

The administration under President Jair Bolsonaro pursues free-market and socially conservative reform policies, welcomed by the Brazilian business community and building on the market-oriented policies of the previous government. However, economic policymaking is hampered by a highly fragmented and polarised Congress, with 30 parties in the lower house and 21 in the Senate, and the ruling Partido Social Liberal having just 10% of the seats in the lower house. President Bolsonaro needs to build and manage working coalitions in order to pass major reforms, particularly those requiring constitutional changes.

Political and social polarisation have increased due to President Bolsonaro´s confrontational leadership style, his socially conservative views, and his odd response to the coronavirus outbreak (while Bolsonaro disputed the seriousness of the disease, it was the regional governments that took containment measures).

The administration is currently weakened and distracted by the dismissal of the Health Minister in early April 2020, and the resignation of the (widely popular) Minister of Justice Sergio Moro soon thereafter. Moro accused Bolsonaro of political interference in police work, and the Supreme Court has authorized an investigation into this allegation. Based on the results (which will be published end of June at the latest) the public prosecutor will have to decide whether to press on charges against the President. However, any indictment would first require approval by the lower house of Congress.

Get a Free No Obligation Quote

Our experts are here for you. Contact us to get your questions answered or receive a free no-obligation quote.

33.5% of respondents in Brazil reported that maintaining sufficient cash flow levels will be their biggest challenge to their business profitability.

The slowdown in the economy has affected Brazil’s automotive sector and payment delays and defaults are expected to worsen in the coming months.

The Brazilian economy is expected to grow only 0.3% in 2015 after 0.2% in 2014, as the much needed return to more orthodox economic policies will negatively weigh on growth in the short-term.