Financial conditions in Turkey will be tighter in the coming months.

This, together with higher inflation and a weaker exchange rate, will hamper domestic demand and probably lead to a sharp decrease in GDP growth in 2019. Turkish business insolvencies remain on an elevated level, with 80% of newly established businesses failing in the first three years. It is expected that business insolvencies will increase this year, especially in the property, construction and energy sectors. That said, it must be also underlined that even in industries severely affected by the current situation there are still many strong and resilient companies.

The proportion of credit sales to B2B customers by Turkish survey respondents increased to 50.2% from 42.8% last year. This increase is the smallest of the countries surveyed in Eastern Europe. This might be a reflection of the sharpest decline in domestic demand since the second half of last year. It may also be connected to reduced dynamic export flows due to limited competitiveness in foreign markets, which in turn is caused by the high inflation rate and the volatility of the Turkish currency. As a result, in some major industries such as the construction and energy sectors, payment behaviour has already deteriorated, with extended payment terms and an increased number of payment delays.

In such a challenging business environment, Turkish suppliers are attempting to stimulate sales growth by giving their B2B customers longer to settle invoices than last year. Average payment terms recorded in Turkey stand at 59 days from invoicing (up from 50 days last year). These are the longest observed in Eastern Europe and compare to a 37 days average for the region. 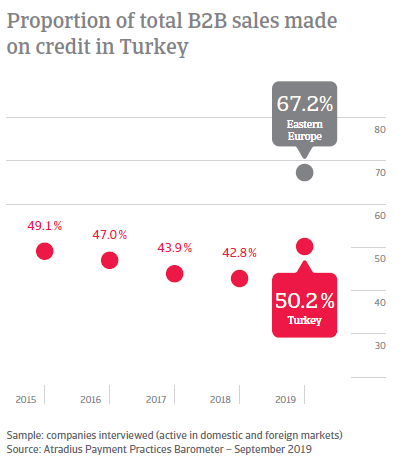 41.5% of the total value of B2B invoices issued by Turkish respondents over the past year was past due. This is the highest figure recorded in Eastern Europe. In line with improved payment behaviour from customers, resulting in increased timely payments (53.1% of invoices paid on time compared to 40.3% one year ago), respondents in Turkey turn overdue invoices into cash significantly earlier than last year (87 days down from 92 days last year). However, to manage potential liquidity issues arising from late payments, 42% of Turkish respondents needed to delay payment to their own suppliers. 35% of respondents requested a bank overdraft extension, while 33% either pursued additional financing from external sources or took measures to correct cash shortfalls. A standout survey finding in Turkey is the marked increase in the proportion of write-offs of uncollectible accounts, currently averaging 2.7% of the total value of B2B receivables (up from 1.9% last year). This is the highest figure across all the countries surveyed in Eastern Europe and compares to a 1.6% regional average.  This finding points to inefficiencies in collection of overdue accounts, ultimately eroding business profitability.

Fewer respondents in Turkey (21%) than in Eastern Europe (60%) believe their B2B customers’ payment practices will not change over the coming months. In particular, Turkish respondents expecting customers’ payment practices to improve are far fewer (31%) than those expecting a deterioration (48%) ultimately leading to more receivables being written off as uncollectable. Amid concerns over tighter financial conditions in the coming months, 66% of Turkish respondents said that difficult access to bank financing would cause them to reduce their workforce and delay business investment due to lack of capital. 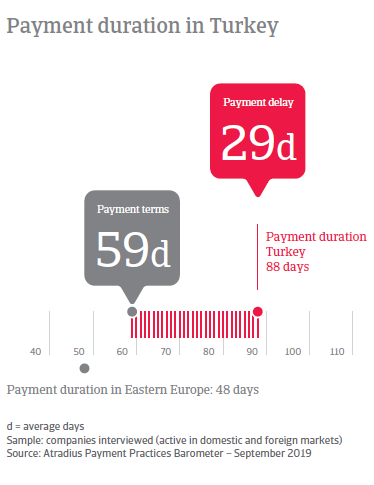 Overview of payment practices in Turkey

Trade credit risk is highest in the Turkish agri-food sector

Over the past year, trade credit risk in Turkey has significantly deteriorated in the agri-food sector, where over half of the total value of invoices remained unpaid at the due date. The services sector recorded the greatest improvement in customers’ payment speed over the past year. There was no change in the credit risk trend in the machines sector over the same period. However, as mentioned earlier, business insolvencies are expected to increase this year, especially in the property, construction and energy sectors.

Proportion of uncollectable receivables is highest in the machines sector 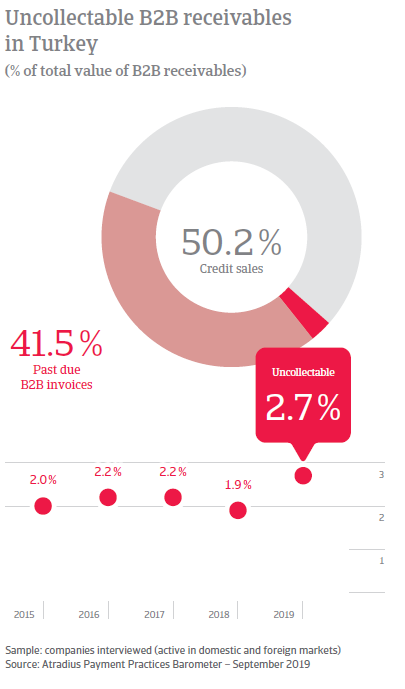 Due to the significant lengthening of their invoice to cash turnaround process, Turkish large enterprises have a markedly worse track record when it comes to collecting overdue payments, with 3.1% of B2B invoices written off as uncollectable. The average for both SMEs and micro enterprises is 2.7%.

Despite monetary tightening the economy remains susceptible to further currency volatility, and the risk of a severe economic downturn has increased.

Turkey: the country most affected by late payment

2018 brought many changes in Turkey – more frequent payment delays, increases in the proportion of overdue B2B invoices and DSO, a longer payment duration.