A major downturn in domestic demand expected in 2020. 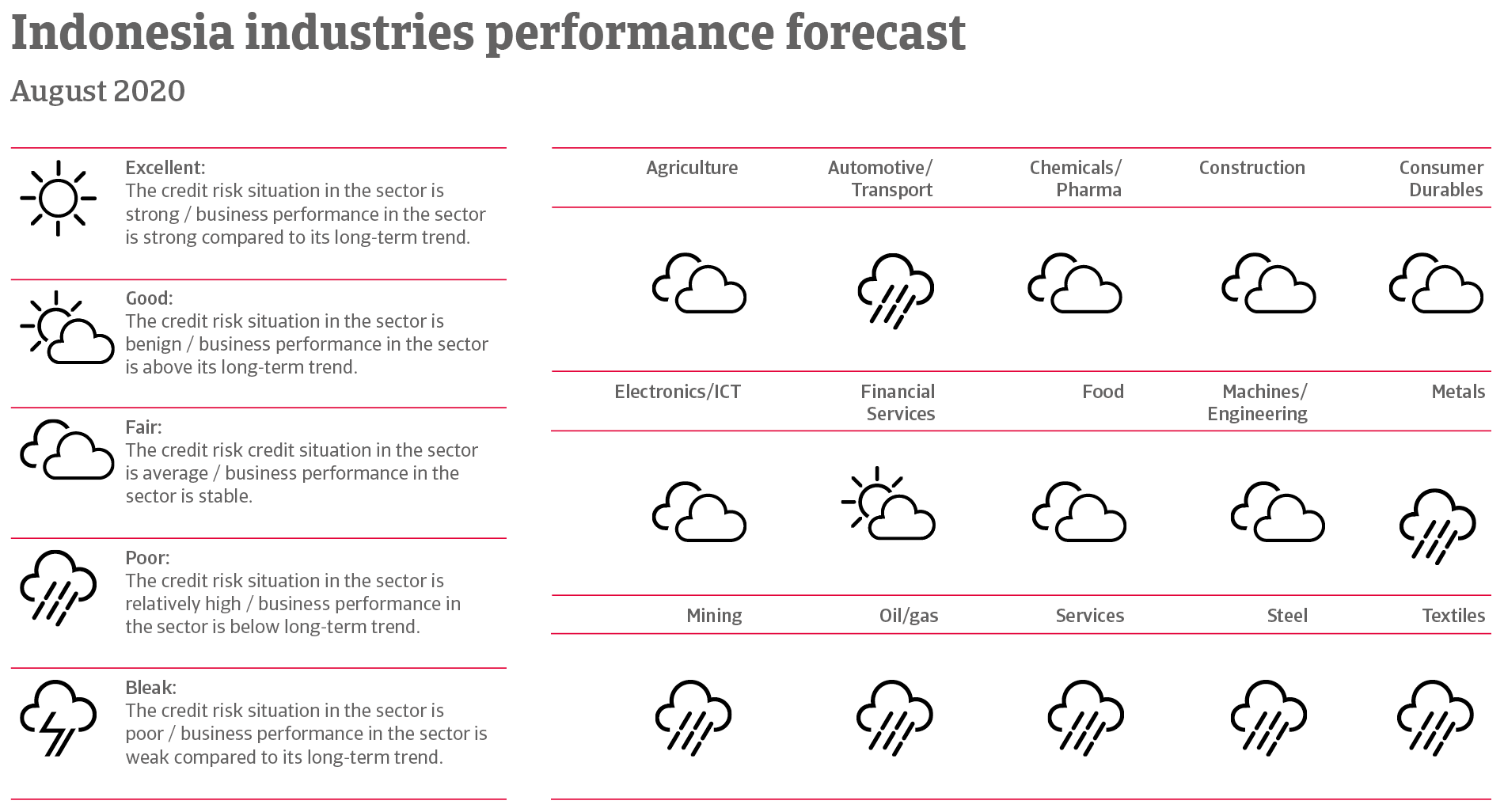 A sharp downturn in economic growth

Together with the global economic downturn, the ongoing spread of the coronavirus pandemic in Indonesia and subsequent lockdown measures are severely affecting the country´s economic performance. Indonesia´s GDP is expected to contract by 2.7% in 2020, after growing 5% in 2019.

Annual private consumption growth, a main driver of Indonesia´s economic expansion over the past years, is expected to contract 2.3% in 2020, as household spending on non-essential goods is substantially decreasing. The tourism sector has been severely hit, and investments are expected to contract in 2020, with ongoing disruptions of major infrastructure projects (construction of new roads, ports and power stations). Sector-wise, domestic transport, services (including tourism) are most severely affected by the coronavirus impact. In the food sector, businesses dependent on imports of commodities face higher prices and cash flow issues due to the rupiah depreciation.

Exports account for just 22% of GDP, which makes Indonesia less susceptible to global trade downturns than some other Southeast Asian countries. However, the sharp decrease in global demand will take its toll, as Indonesian exports are forecast to decrease by about 5% in 2020. Lower demand from China and deteriorating prices will mainly hit producers and exporters in the mining and energy industries.

The government has removed the constitutional budget deficit cap of 3% of GDP for the 2020-2022 period, and has allocated stimulus measures amounting to USD 49 billion (4% of GDP). Key measures to support the economy include higher health care spending, social protection measures, corporate tax cuts credit restructuring, special loans to SMEs, and cash handouts to the poor and workers in the informal sector (about 70 million out of Indonesia’s population of 270 million work in the informal sector). Additionally, the Central Bank lowered its benchmark several times, to 4.0% in July, and lowered the reserve requirement ratio for banks in order to give the banking industry more room to support local businesses.

While the stimulus measures should help to buffer domestic demand, the major expenses, together with much lower tax and commodity revenues will lead to a fiscal deficit of more than 7% of GDP in 2020, with public debt increasing to 43% of GDP (36% of GDP in 2019). Higher public spending is impacted by the persistent low tax collection, and inefficiencies in government budget disbursements persist.

The banking sector is in good shape, being well-capitalised (CAR ratio 23%) and with a low non-performing loans ratio (2.5%). However, a negative net foreign asset position exposes commercial banks reliant on foreign financing to shifts in the cost or availability of such funding.

Indonesia’s external position has improved in recent years, as both foreign debt in relation to exports of goods and services and the debt service ratio decreased, diminishing the country´s dependency on foreign capital. However, the debt service ratio remains relatively high and the annual current account balance has remained persistently negative.

The large capital outflow from Indonesia and other emerging markets in Q1 of 2020 has led to a sharp depreciation of the rupiah and to a deterioration of Indonesia´s stock market index in February and March 2020. In order to manage the rupiah depreciation and stabilise the domestic financial market, the Central Bank intensified its intervention in the foreign exchange and forward markets and purchased government bonds.

Late in taking actions against the coronavirus spread

In April 2019, President Joko Widodo was re-elected with 55.5% of the votes, providing him with a second term until 2024. As in his first term, Widodo has continued to tackle economic reforms, such as infrastructure improvement to support the manufacturing sector and digital economy, reforms of the labour market and foreign investment rules. However, some key elements of his policy agenda remained contested due to vested interests.

Compared to its neighbours, Indonesia´s government was late in taking comprehensive measures to contain the coronavirus spread, most probably due to concerns over negative consequences for the economy. This has exposed the administration to some criticism.

The rapid spread of Covid-19 across the globe is taking a heavy economic toll on both advanced and emerging economies. Lockdowns reduce consumption opportunities and create supply-side shocks.