Russia's Fortress strategy is not for free

Russia's Fortress strategy is not for free

Russia's strategy to protect its economy against external shocks is successful, but comes at a cost for its population

On September 19 2021, parliamentary elections will be held in Russia. These elections will be an important electoral challenge for the United Russia party and its de facto leader President Vladimir Putin. The ruling United Russia party won a supermajority (343 out of 450 seats) in the Duma, the lower parliament, in the 2016 election. Whether this is still the case after the upcoming elections, is uncertain. Discontent among the population is growing over low economic growth and government cutbacks, translating into stagnating (or even declining) real incomes. Popularity of the president and government have come under pressure, as has the assessment of the overall direction of the country. About 65% of Russians approve of President Putin, compared to 85% around the annexation of Crimea and the war in Eastern Ukraine (2014). At the same time, only 50% of Russians approve of the government in general and the same percentage thinks the country is going in the right direction. On both indicators, the score was around 60% in 2014. United Russia is polling around 30% of the vote for the upcoming parliamentary elections, compared to 54% of the popular vote it gained in the 2016 elections.

Despite its declining popularity, the voting system does work in favour of United Russia. Half of the Duma seats are allocated through a proportional representation party list voting, with a threshold of 5%. The other half is appointed through majority voting, where one deputy is elected for one constituency. In this electoral system, the vote is skewed in favour of the largest party, which is United Russia. According to latest projections, United Russia could lose its supermajority (two-thirds of the seats), but they are almost certain to retain a normal majority. Furthermore, United Russia can lean on several opposition parties that are considered ‘regime-friendly’, such as the Communist Party, the Liberal Democratic Party and the party ‘A Just Russia’. The ability of other opposition parties to compete on a level playing field is limited, as it is more difficult for them to get on the ballot, they have limited access to the media, and there are layers of bureaucratic restrictions. 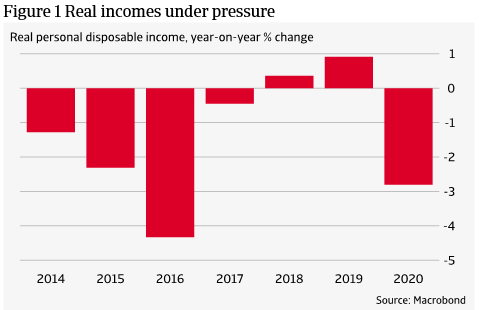 Even though economic stagnation has been going on for several years, Covid-19 and sanctions seemed to have reinforced this trend. In 2020, the overall economy contracted by ‘only’ 3.0% as the government imposed relatively mild restrictions. However, household consumption declined by a much higher 8.5%. Government support through the Covid-19 crisis was relatively limited compared to other European countries (4.5% of GDP in direct support; 6% of GDP if guarantees are included). In 2020, 17.8 million Russians were living below the poverty line, or 12.1% of the population. In 2018, Putin pledged that by 2024, he would halve the number of Russians living in poverty. In 2020, when the number of people living in poverty rose, this target was pushed back to 2030. Besides declining income levels, Russians are also concerned about rising inflation. Inflation rose to 6.5% in June 2021, with food prices being the main driver, up 9.0% year-on-year. This is also putting pressure on real incomes, as wage growth remains behind.

Economic stagnation in recent years is in part driven by a change in approach to fiscal and monetary policy. This is often referred to as the ‘Fortress Russia’ strategy. The pillars of this strategy lie in prudent fiscal policy and credible inflation targeting. This ‘Fortress’ strategy was conceived after several major financial crises, which helped topple its Soviet empire in 1989, wiped out the value of the rouble twice in the 1990s, and struck again after the financial crisis of 2008. In 2014, Russia suffered the twin shock of falling oil prices and Western sanctions after the invasion of Crimea. The 2014 crisis caused a 55% depreciation of the Rouble vis-à-vis the USD in 2014-2015. Between Q1 of 2014 and Q1 of 2015, the central bank used USD 130 billion in international reserves to try to stabilize the rouble.

Since 2014, however, a more disciplined fiscal policy has resulted in strong public finances and foreign reserve accumulation, while the introduction of inflation targeting has been successful to bring inflation down from its very high 2014-levels. This has allowed Russia to build resilience against external shocks, including sanctions. Several rounds of sanctions were imposed on Russia over the past couple of years, in part because of the annexation of Crimea, but also due to the treatment of opposition figures and meddling in foreign elections. While they occasionally inflicted pressure on the Rouble and on economic growth, at no point did they threaten to cripple the Russian economy.

The government started to operate under a fiscal rule in 2017, and the rule stipulates that federal budget spending (excluding government debt interest payments) cannot exceed estimated budget revenues. The estimated budget revenues will be based on revenues from oil and gas calculated at the benchmark oil price and a projected rouble-dollar exchange rate, while non-oil and gas revenues will be estimated in a ‘normal’ fashion. The benchmark oil price was USD 42 per barrel Ural blend in fiscal year 2021, while the current market price of oil is around USD 70 per barrel. Excess revenues occur when the oil price exceeds the benchmark (the current situation), and these are transferred to the National Wealth Fund and invested in foreign assets. If the price falls below the benchmark, the government can supplement the oil revenue shortfall by withdrawing from the NWF. The fiscal rule arguably helps to diminish the pro-cyclical effect of oil prices on the Russian economy.

Central government finances in Russia can be considered very healthy. Government debt was 18% in 2020, compared to a median of 36% of countries in the same sovereign rating bracket. The fiscal deficit deteriorated from 1.8% in 2019 to -3.8% in 2020 due to the economic recession following the Covid-19 pandemic. In 2021, however, the deficit is forecast to narrow to -1.8% as Russia will revert to fiscal austerity as the government emphasises preserving fiscal buffers as a safeguard against external shocks. The fiscal deficit is expected to shrink further to an average of -0.8% in the period 2022-2025.

The other important pillar of the Fortress Russia strategy is that the Central Bank of Russia (CBR) acts as a credible, independent institution. Monetary policy of the central bank is centred on an inflation target of 4%. The CBR moved to a free-floating rouble in 2014, from a managed floating exchange rate regime it operated before. It used to operate a dual-currency trading band with the US dollar and euro. Even though the central bank since 2014 does not officially follow exchange rate targets, it still can conduct FX interventions during episodes of high exchange rate volatility. The last time it conducted FX interventions was in July 2015. However, the CBR does conduct FX purchases and sales as part of the fiscal rule. For instance, at the beginning of the Covid-19 pandemic, it started to conduct FX sales under the fiscal rule as the oil price collapsed. 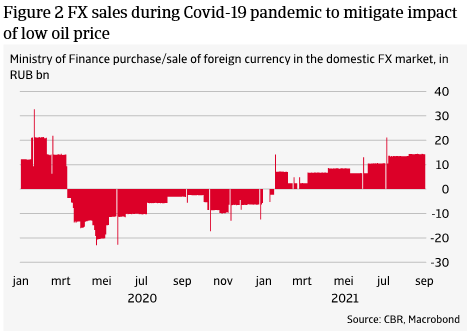 During 2020, the CBR lowered the policy rate several times to stimulate the economy. This was possible as inflation was low. By March 2021, however, it started to reverse its monetary easing cycle as inflationary pressures were building. It raised the policy rate four times since March 2021, bringing it from 4.25% to 6.5% in July. Because of prudent macroeconomic policy – both fiscal and monetary - Russia was able to rebuild its international reserves and reduce external debt. External debt in Russia has fallen considerably over the years, driven by repayments, deleveraging of corporates, and the government’s aversion to external borrowing. Gross external debt declined from 41% of GDP in 2016 to an expected 27% in 2021. The Covid-19 pandemic barely had an effect on external debt. 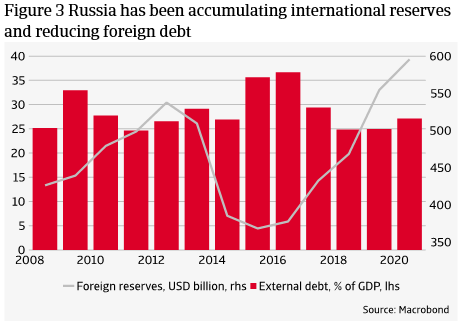 The central bank could lean on USD 601 billion in total reserve assets in July 2021, up from USD 368 billion in 2015. Foreign reserves cover about 28 times the short-term external debt. NWF assets have risen to USD 188 billion at end-June, or almost 12% of GDP, on par with a year earlier as a share of GDP. Over the coming years, we expect that Russia will further reduce its external debt position and increase foreign reserves, as economic growth is increasing as coronavirus restrictions are eased further, vaccination coverage is widened and external demand picks up.

Economic stagnation has its roots not only in the ‘Fortress Russia’ strategy, but also in several structural impediments. Potential output growth is estimated to be 1.1% over the next decade by Oxford Economics, well below that experienced in the middle of the previous decade. Commodity dependence, a declining demographic profile and a weak investment climate all weigh on growth. To start with demographics, according to Oxford Economics forecasts, the working-age (those between 15 and 65 years old) will decline by 17.8% between 2017 and 2050. In addition, the proportion of Russians aged 65 and older will rise from 13.5% in 2015 to 22.9% in 2050. The participation rate is already fairly high, and therefore will offer limited support to growth. Pension reform to increase the retirement age will partially mitigate these trends. However, this will not fully offset the negative demographic profile.

Another challenge is the high degree of state control over key sectors of the economy. The state has a large footprint both in terms of its economic contribution and its intrusiveness in business activity. State-Owned Enterprises (SOEs) are systematically less efficient than peer firms in the private sector. Only minor progress has been made in recent years to reduce the state footprint. This makes Russia less interesting for foreign investors. Inward Foreign Direct Investment (FDI) to GDP ratio was 27% in 2019, compared to an average of 37% in Eastern Europe, and inward FDI has been declining over the past decade. Russia needs to implement more robust reforms to create a dynamic business environment and to attract foreign investments that are needed to raise economic growth and income levels. The policy of fiscal austerity under the ‘Fortress’ strategy also underlines the need to make these reforms.

Fortress Russia strategy not for free

As vaccination campaigns are underway, the world economy is recovering from the pandemic. Advanced markets generally have higher vaccination rates than emerging markets

UK trade is facing a double whammy from Brexit and Covid-19, putting particular strain on trade with the EU.