As many building materials are imported from the EU tariffs or limits on quantities imported after Brexit could lead to higher costs and material shortage. 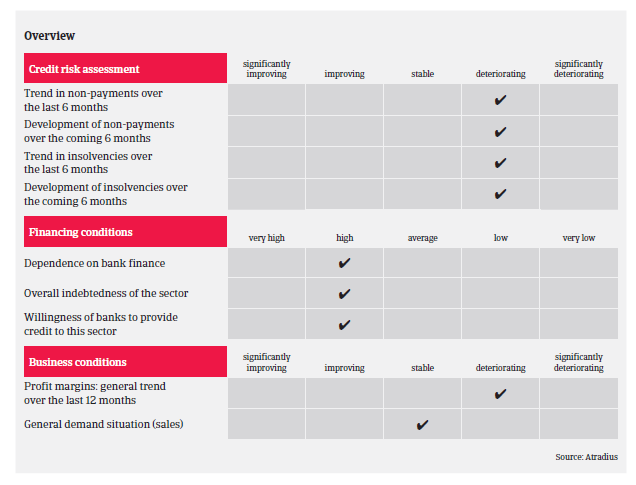 In 2018, construction demand in the UK remained stable, although signs of a slowdown became visible in the second half of the year. There is a shortage of housing in the UK and demand is outweighing supply. Therefore, activity in the residential construction subsector should remain reasonably buoyant in the short- to medium-term.

The commercial construction sector performed rather well in 2018, but businesses are increasingly impacted by (Brexit-related) reluctance of clients to place orders for new projects.

In the public construction segment there are some major projects underway. However, these projects are not without their problems due to delays in delivery and severe pressure on costs.

While the construction material subsector is supported by the buoyant housebuilding segment the short-term outlook is volatile, as Brexit has caused a considerable amount of uncertainty. 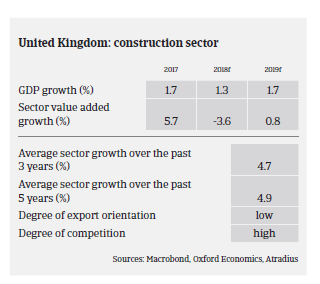 2019 is expected to be a rather difficult year for construction, due to the lingering uncertainty over Brexit and the impact it could have on output, investment and the current shortage of skilled workers. The ongoing repercussions of the Carillion failure in early 2018 (the largest corporate insolvency ever in the sector) on businesses is still high, with investors and financiers becoming particularly careful.

Legacy contracts have been a serious issue for the construction industry over the past 4-5 years, as many businesses pursued an aggressive accounting strategy by sealing risky contracts, which proved unprofitable. However, it seems that apart from some issues regarding Energy from Waste contracts, legacy issues will be less of a problem in 2019.

Access to bank finance is difficult, as there are growing signs that financial institutions want to reduce their exposure to construction and related sectors, which could affect the confidence of other credit providers. All this could adversely impact the liquidity of construction businesses in the medium-term and have an impact on access to uncommitted facilities. 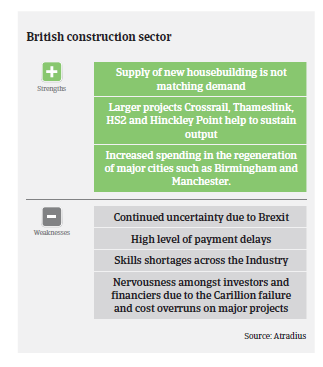 Average payment in the British construction industry is 75 to 90 days, and the level of protracted payments and payment delays remains high. After increasing in 2018, the level of non-payment notifications is expected to increase further in H1 of 2019.

Construction insolvencies were on a high level between January and September 2018, increasing by more than 16% year-on-year in Q3 2018 alone. The insolvency outlook for 2019 is negative, with further increases expected due to the increased economic uncertainty, persistent late payments, lack of supplier support, contract overruns, escalating costs and retention payment issues. The knock-on effect of the Carillion liquidation will continue to impact suppliers and subcontractors (according to unconfirmed reports, retention payments outstanding from Carillion could amount up to GBP 1 billion).

If the coming months fail to provide more clarity about the conditions under which the UK will leave the EU, the commercial and infrastructure segments in particular could suffer from lower investments. So far, there has been more evidence of project delays as opposed to cancellations, as investors wait to see the Brexit outcome.

As more than 60% of building materials are imported from the EU, any increase in tariffs or limits on quantities imported after leaving the EU could lead to higher costs for British construction businesses and a shortage of building materials. Once the UK leaves the Single Market it is likely that the current issue of skill shortage will worsen, especially if there are no follow-up agreements with the EU on the free movement of people. This could result in even higher pressure on wages, causing construction firms to face considerably higher project costs. 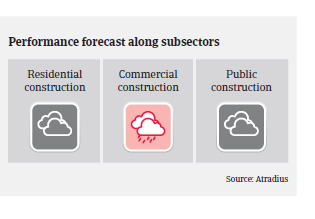 Currently the UK construction sector still benefits from having access to the European Investment Bank (EIB) and the European Investment Fund (EIF), which have invested EUR 7.8 billion in major infrastructure projects in the UK and provided loans worth more than EUR 500 million to smaller British construction businesses. A loss of that financial support could significantly impact the ability of businesses to deliver big infrastructure projects, such as High Speed 2, and reduce development opportunities for start-ups.

We continue to underwrite cautiously, with risks considered on a case-by-case basis. Even more than in the past the requirement for up to date regular financial information supported by visits, meetings and conference calls is essential to be able to provide the most informed underwriting decision we can. The lessons learned in the past twelve months is that the speed at which companies fail appears to have increased, as stakeholders sometimes take drastic steps to safeguard their position.

Both payment delays and insolvencies are expected to increase in the coming months as decreasing investments and lower production will impact suppliers.

A modest insolvency increase is expected in 2019, with businesses related to oil and gas exploration, construction and agricultural markets mainly exposed.

The UK leaving the EU without a deal would be a major disruption, causing business insolvencies to be higher in the UK and EU27.