With an average of 53.4%, India had the highest proportion of domestic and foreign past due B2B invoices of all the Asia Pacific countries surveyed.

With China’s GDP slowing, India has taken over the role of global growth leader with GDP growth expected to reach 7.3% this year and 7.6% in 2018. Due to its relatively closed economy, the country will not feel much impact from China’s slowdown and possible trade measures in the US. Despite this, 38.1% of respondents in India said that they plan to increase protection against potential risks stemming from these developments and Brexit.

The average percentage of transactions on credit in India declined from 45.3% in 2016 to 44.4% this year. The country’s average is also slightly below the average for Asia Pacific overall (45.9%).

India had one of the longest invoice to cash turnaround periods of the Asia Pacific countries surveyed. However, payment duration improved from 66 days in 2016 to 63 days in 2017. 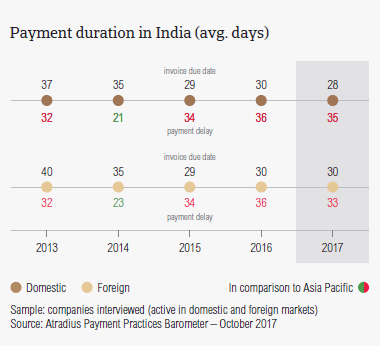 The main reasons for domestic and foreign payment delays in India are the same as those reported at regional levels. However, Indian suppliers reported this more than their peers in Asia Pacific overall. 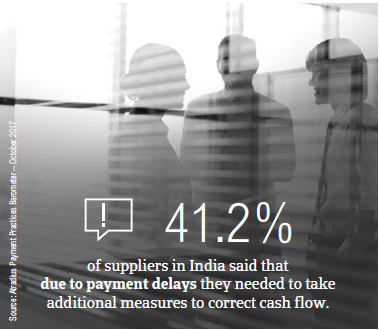 Respondents in India seem some of the most likely in the Asia Pacific region to increase protection against risks stemming from Brexit, US protectionism and the slowdown in Asia.

Similarly to what was reported in 2016, the total value of B2B receivables written off as uncollectable in India is the highest in Asia Pacific. 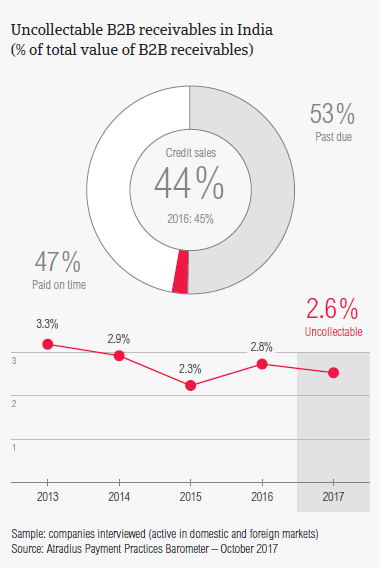 Respondents in India seem to be optimistic about the coming 12 months. Most of the respondents stated that they expect an improvement in the payment behaviour of their B2B customers.

Despite robust growth rates, pricing pressure and cheap imports are key challenges in the domestic ICT market, especially for smaller IT distributors.

The first hint of spring is in the air leaving this Economic Outlook in a position of cautious optimism.