Despite efforts of food exporters to diversify shipments away from Britain a hard Brexit remains a major threat, potentially leading to more insolvencies. 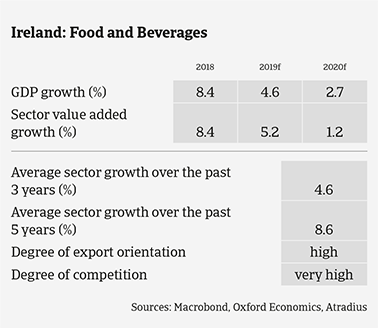 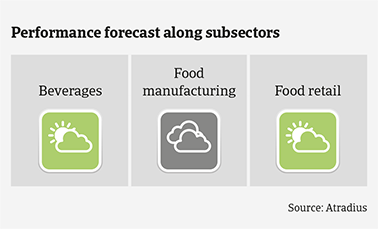 The total value of the Irish food and drink industry amounted to EUR 27.5 billion in 2018, of which EUR 13.5 billion was exported. However, value of Irish food exports decreased 4% year-on-year as volume growth was offset by global price volatility.

The UK market accounted for 37% of all Irish food and drink exports in 2018 (EUR 4.5 billion), a robust performance given the significant exchange rate issues experienced in 2017 and lingering Brexit uncertainty. Food deliveries to markets outside the EU accounted for 29% of food exports (EUR 3.45 billion), down from 32% in 2017 due to significant declines in exports of powdered food to the US.

All main subsectors have been rather stable in 2018 and 2019. Pork meat sellers benefit from higher sales prices due the African swine fever epidemic in China, while primary producers of beef are affected by lower sales prices. Value added in the dairy segment is expected to increase more than 5% in 2019. However, Brexit uncertainty and currency fluctuations have led to decreasing profit margins. Irish dairy producers are increasingly looking to Asian markets as part of their diversification efforts.

Growth in the beverage sector is largely driven by increased demand for Irish whiskey, which accounts for 42% of Ireland’s beverage exports, worth EUR 1.5 billion. While Irish whiskey has been spared so far from recently imposed US tariffs on EU imports, the segment remains vulnerable to future tariffs (38% of total beverage exports go to the US).

Despite the efforts of food exporters to diversify shipments away from Britain, a hard Brexit remains a major threat. Any future imposition of tariffs by the UK on food imports from the EU after leaving could be devastating for the Irish food sector. A hard Brexit could also cause delays in shipments of fresh food to Europe, increasing costs and reducing competitiveness (almost 80% of Irish exports to Europe go via the UK). Irish companies have continued to acquire smaller UK operators in order to maintain access to the UK market after Brexit. The several Brexit delays have provided Irish companies with some time to diversify their markets.

The average payment duration in the Irish food industry is 45-60 days. Payment behaviour in the sector has been very good over the past two years, and the number of protracted payments, non-payments and insolvency cases has been low. However, we expect a modest increase in payment delays and insolvencies (below 2%) in the coming six months due to the fierce competitive environment and persistent pressure on margins. In case of a hard Brexit in early 2020 a higher increase in food business failures cannot be ruled out.

Our sector performance assessment remains “good” for the time being due to the low level of credit risk seen so far. Our underwriting stance remains very open for beverages, open for food retail and neutral for the dairy and meat segments.

Ireland’s highly open economy is cooling off and demand in export markets is set to remain weak while the domestic economy faces increasing capacity constraints and lower government spending.

The Irish economy is expected to grow by about 2.5% in 2019, but remains exposed to ongoing economic uncertainties stemming from the Brexit decision.

The global economy is losing steam in 2019 and 2020. As the trade war accelerates this, consumer resilience will help avoid recession.